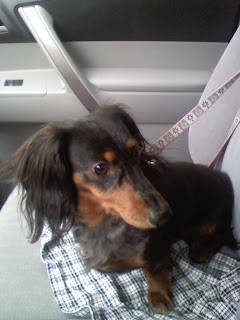 One of the coolest privileges a foster sometimes gets is to name dogs. Why? Since some dogs are found as strays, there isn’t any name history for them - renaming them is the first step to starting their new lives.
Most fosters, either because of their childhoods or personal histories, develop an addiction to a particular breed, and mine has become the dachshund. So when in May of 2010, I was told a  miniature long-haired dachshund was left at a shelter by a family who couldn’t afford to keep her, how do you think I could say no? It’s been years now, and I’ve yet to. Plus this girl made it easy. Four years old, a total goody-two-shoes clever dog with soft curls and a charming, while pleasantly reserved personality, she reminded my family of Charlotte Lewis character from the show 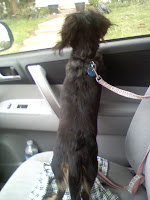 Lost. I didn’t follow the show closely, so I can’t claim to know all the intricacies of that character, but knowing that this dog’s previous name was Strudel, Charlotte sounded like a great contender. Moreover, if you saw any of the Sex and the City shows, you would understand it if I tell you that my Charlotte could give that show’s Charlotte a run for her money! So, the name stayed. At the Adoption Fair event, Charlotte show with a heart of gold. She would have had no problem getting presented to the Queen, let alone potential adopters. She showed affection toward people and knew how to work the crowd, while always remembering her manners. So, I was not surprised that she got adopted (on the spot) by a couple of HART’s earlier adopters, who already had two or three (doxie) dogs of their own. The man of the family grew up with the breed and had about 6-7 doxies in his life. Charlotte must have known it, for when he took her into his arms, the dog made the best impression of a princess then melted at his touch, almost literally. Frankly, I don’t remember him even putting her down through the entire adoption process. The family literally walked away with her still attached to his heart. Oh, and they kept her name!