Any yet, even with that and an occasional very-dachshund stubborn streak, adopting her turned out to be easy. By a total fluke, as it often happens in rescuing animals, she was seen by her future family at a local homemade pie shop when a fellow foster brought her in after running an errand. With her husband away on business, Jackie's future lady of the house took her kids to the same exact shop to pass the time and enjoy the weather. Already having a dog of their own, a sizable basset hound, who has had countless surgeries to fix his back, this family was not looking for another dog. But seeing Jackie changed all that in an instant. 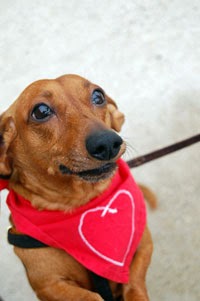 After her adoption became final, the family asked I bring her over to the house in order to introduce her to their kids and several pets. Walking with her into their welcoming home, where an army of toys, blankets and love were already waiting for her arrival, I wondered what her future would be like. Sitting on the floor of the family’s living room, with Jackie slowly exploring new, soon to be her space and companions, I never guessed that would be the last time I’d see the little girl alive. Granted, the thought often crosses my mind, as I watch family after family lead away dogs I have come to know and love. I think on their stories, their peculiarities and their insatiable hope for a better future. I know that many of these families will spoil them with toys and food, just as I know that many of them will move away or have their children grow up and leave the dogs behind with the parents. Life is both changeable and predictable for all its creatures. But because I foster personality dogs, I try to keep in touch with as many of these dogs’ families as I can. Facebook, phone or snail mail, it is their choosing. Playing the role of a dog guardian in the mysterious process of transformation from a stranger to a beloved companion, I often receive heartwarming holiday cards, unexpected phone calls, and out-of-the blue emails peppered with pictures of my former fosters on couches, people’s laps, long pebbly beaches, and an occasional midnight parade, swaddled in Halloween costume or a blanket. And, even if I don’t hear from the adopters, in my heart, I remember and believe that everything turned out okay.

It is also true, but now and then I wonder if my dogs remember me or the time they spent lounging around with my own small army of doggy couch-potatoes. When their families bring them back for annual homecomings or just to visit, it is amazing to see these dogs show how well they remember with their wagging tails, wiggling bodies and smiling faces. After all, seven years is a long time, and time had taught me to let go and accept the fact that my former furry protégés’ have lives of their own. And yet, I somehow never consciously considered that one or these many dogs would leave me, their humans and this life completely behind. Jackie was my first one.

My deepest condolences to the family, as they still grieve their little family member, Oscar, the basset hound who learned to share his house with a spunky red-colored newcomer, and Jan Marie, whose unplanned stopping by that pie-shop made all the difference in all of our worlds. Jackie, thank you for giving us all a chance.