True, Tobe might be a grumpy old gentleman, but surrendered dogs end up so because they are not housebroken or they growl.  Aside from serious aggression issues, people simply prefer not to invest in a trainer to fix either issue, instead choosing to drop it at the shelter, hoping for the best. Some don't even do that. Letting dogs "out into the wild” or offering them “free to a good home” on Craigslist have become popular options, until people realize that most "outdoor" dogs get picked up by Animal Control and possibly later destroyed or get hit by a car. And, those nice people on Craigslist were looking for nothing more than a "bait" or "training" dog for their "champion" dog-fighting killer. Is that the end you wish for the animal you are trying to rehome? I sincerely think not.

Then, there are special cases. Three years ago, I fostered two nine month old poodle puppies, who were left behind in a foreclosed property as part of that family’s plan "to stick" it to their mortgage lender, Bank of America. If not for the pups’ whining and the overly concerned neighbor, the bank would have had the grim task of finding two innocent bodies while taking over the property weeks later. What's especially devastating is that newspapers are filled with tales of countless older dogs, in the same situation, left to slowly waste away of thirst and hunger, while faithfully waiting by front doors. They die quietly, still guarding their homes and not disturbing any neighbors.

Life is a complicated thing and there are as many reasons for leaving an animal behind, many of which I sympathize with, but there are others, that...Well, you be the judge. Below are the real reasons people gave up dogs as experienced by me and some fellow fosters: 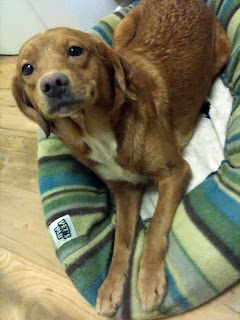 My new foster is luckier than that. I know full well that despite her shyness, little Pistachio will find her new forever home, at which point, losing her first family will seem like a blessing in disguise, but if you're thinking of giving up a dog or a cat, please consider if your reason/s can be fixed through a bit more research or action. And, if not, please, please don't take it to the nearest kill pound/shelter. Overpopulation at those kills over 4 million lives each year. Call your vet (they are better connected than you think) or go on Petfinder.com to find a local rescue organization to take it in. Your pet deserves a chance at life.