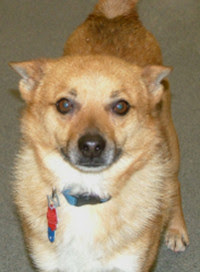 I do. The longer I foster, the more I believe in the grand design of things, the kind that brings people and their dogs together. Just when you begin to wonder why your perfect new foster dog isn't getting adopted - it happens in a blink of an eye.

The dog who wasn’t there
Wylie came to live with me from a high-kill shelter on the border of Virginia with Tennessee. An obvious mutt, he was a super sweet but also an unbelievably shy little boy. The entire time I had him I tried to get him to meet people, but he would either freeze or cower away from everyone.
When it’s right – it’s right
Then one day, when I was about to leave, having tried for the whole extra hour to get him noticed, he surprised me and everyone by picking his own family. As I was walking out of the store where the adoption fair is usually held, he was walking alongside me, but then he wasn't. I turned around thinking he might have gotten loose from his harness only to see him climbing into a little girl’s lap. Two girls were sitting in the corner, waiting for their Mom to be done with shopping at the end of the shopping isle, when my dog refused to leave them alone. Wylie was relentless. It looked as if he was their dog all along and he finally found them after a long break. He was now licking their squealing with delight little faces. When their Mom returned, she too fell in love with him and declared that they just have to adopt him right then and there. I thought they all were just being nice, but they wouldn't leave each other’s sight until all the interviews were done. I couldn't believe the change I saw in Wylie, but he must have patiently waited all this time for this exact family to come along and nobody else. He couldn’t have picked a better, more loving bunch. Two weeks after adopting him they brought him along to say hello. Now having a free reign of the house, they said, Wylie was now showering those little sisters with lots of affection every chance he got. Their mother confided in me that they recently lost their father and this little shy boy not only brought joy back into their lives, he managed to bring them back together as a family again. By the way, the girls picked him a new name. He is now called Brownie. Sweet, no?