Un-abandoning Snyder or what the neighbor saw

It finally happened to me. The epidemic of pets left behind by their moving owners has finally reached my door. I kept reading story after story online and in the papers, wondering how people can “forget” to take their family members with them when permanently relocating, and now I am being stared down by one of these abandoned creatures in person. And let me tell you, Snyder’s eyes are the size of saucers!

The Neighborhood Watch
In the most banal of stories, his family lived in their American dream home for years, but one day decided to move to sunny Florida. They were gone several weeks when one of their neighbors noticed a small furry animal living in their empty backyard. Upon closer inspection,

he discovered that the dirty, shaggy, growly and scared creature was not a rabbit or an oversized rat, but that family’s beloved Shih Tzu! He climbed over their fence and a few animal control formalities later Snyder was safe. Most animals like him don’t get that chance since they’re left inside empty houses to die while waiting for their “loved ones” to return.

A Suitcase Full of Miracles
Since the great outdoors is something most modern dogs know little about, the pup, emaciated and matted as he was, got diagnosed with an eye ulcer and a grim diagnosis of Lyme disease. Realizing that Snyder’s prospects of getting adopted in that shape as pathetic, the shelter called HART, the rescue I foster for. And, because of his then “cuddly” personality, I got a call asking me take him in. When I picked him up from the vet clinic tirelessly helping the rescue, he was sent home with a small suitcase of medicines to take care of his ails. 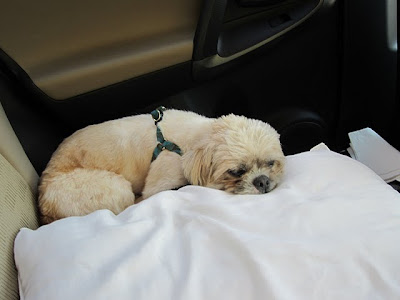 Scrub-a-dub-dub
That evening, four vigorous, back-to-back shampooings turned his smelly brownish coat to light color grey, and his distrustful paralysis into an exhausted coma-like sleep under the mountain of towels. I learned from the vet that his eye ulcer was likely caused by something puncturing the transparent part (cornea) of the eye. The eye itself remained intact and, since vision is important to dogs, his cornea’s cells started multiplying rapidly to get the eye back to normal. With some help from a mysterious “serum”, made by spinning Snyder’s own blood into plasma to eliminate rejection, plus some good old eye antibiotic, Snyder’s eye started improving by leaps and bounds. Two weeks later and it wasn’t even cloudy. Lyme disease, as people living anywhere near the woods know, is caused by a Lyme disease-carrying tick, and since he didn’t get properly protected by the application of any of the widely available topicals, one such sucker got to him in that lonely backyard. The symptoms of Lyme are surprisingly similar to those in humans, with one major difference: it can make dogs unpredictably aggressive. Countless dogs contract this very treatable sickness every year and get put down because they bite their owners, when all you have to do is ask your vet to test for Lyme. A 30-day treatment plan of cute peach-colored tablets will return your beloved Fido back to his loving ways. Case and point: Snyder stopped being cantankerous exactly 3 days into his. Now there’s a miracle drug!

Coming home
Fast forward two weeks to his first adoption fair and there they were – his ideal adoption family. They drove 40 miles each way to meet him after seeing a picture of a grimy little monster on the rescue’s website. I told them that if they liked him looking like that, they would love him in person, which they did. Having just adopted another forgotten Shih Tzu-soul from a hoarding case in Pennsylvania, this family wasn’t scared of his cloudy eye with a red dot in the middle or his Lyme disease. He was perfect to them. What moved me the most is that they kept embracing him over and over like he was the prodigal son who had finally found his way back to his real family. Judging from the pictures they sent a week later, Snyder felt exactly the same way.