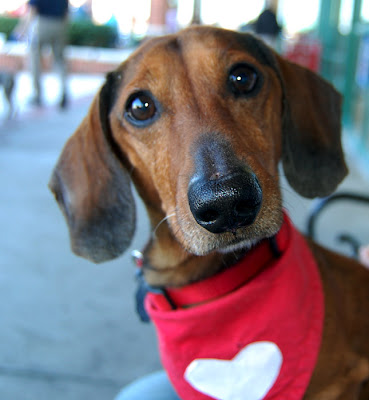 The great escape of the breathless monster
Do you want to hear a happy ending story? Here it is. Charlie, the standard dachshund size boy got spoken for by my rescue hours before his scheduled "end". His family dumped him because he was annoying everyone. Furthermore, when I was offered to take him, I was seriously warned that he was one of "the most vicious dogs" that pound had ever seen. It took two hulky prison inmates
to subdue him for his transport. For that reason alone, he was muzzled on his six hour ride to Northern Virginia to a point of not being able lick his nose or even drink water.

Imagine my surprise when the following night I met a dog who was nothing but a sweet little five year old gentleman with manners. He didn’t make a sound on his ride home, ate his dinner in silence, quickly made friends with other dogs and even woke me up in the middle of the night asking to be let out! I almost couldn’t believe he was a dachshund! This breed is notoriously difficult to housebreak due to its prized ability to think independently, which means not relying on humans for basic decisions.

Needless to say, Charlie didn't stay with me long. With his purebred good looks and perfect temperament, it only took only one Adoption Fair event for him to get snatched up by a great guy from Wisconsin.

Here is the shocking part. Perfect little Charlie only stayed with me for a week and three days, during which time I heard him cough like so many other dogs after they leave the shelter. His vet told me that stress in dogs, just like in people, lowers their body’s natural ability to fight infections, especially respiratory ones. Charlie’s cough was dull if a bit wet, so it was diagnosed to be no more than a case of a kennel cough, which is akin to regular cold in humans. 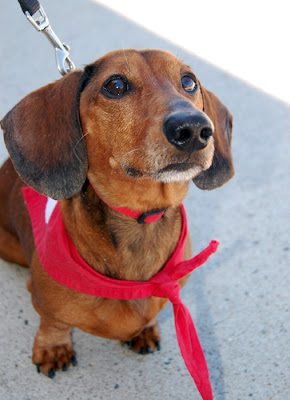 Brian, who adopted him, called me four weeks later asking questions about his medical history. Turns out, Charlie’s cough has gotten so much worse that it started keeping his owner up at night. Several vets, endless xrays, and massive quantities of antibiotics later – Charlie was getting progressively worse. He became lethargic. He refused to play. His cough attacks started sounding like asthma. Luckily, Brian’s horse-owning coworker happened to recommend a local vet specializing in respiratory problems. Hundreds of dollars in new diagnostic tests later, Brian called again with an update. Charlie suffered from a long term infection, where his lungs were overpowered by so many multiplying bacteria that his body couldn’t attack and expel them all anymore. After first undergoing a tracheal wash and then a strong course of specialized antibiotics, Charlie was put on a lifelong low dose of steroids. When lungs are under attack over a period of time, body’s ability to recover completely is reduced and needs a “boost” in the shape of a steroid to keep doing what it did naturally under regular circumstances.

You save him and he saves you right back
About a year later Brian called me with more news. He said that Charlie is now almost completely recovered and loves to run after his Frisbee without getting constantly winded. He added that even though the previous year had been especially tough, it took Brian’s losing his job to become conscious of how much Charlie has grown to mean to him in his life. He said that he decided to move back to Wisconsin to be closer to his family, and that there is no question he will be taking his beloved dog with him. It's amazing, when Charlie’s previous owners dumped him because his wheezing became annoying rather than finding out what was that caused it, Brian took a completely different path and found his “best bud in the world” in the process. And even though, he still thinks it was chance that brought them together, I am convinced that it wasn’t.