Sue's contradictions or how one foster dog taught a simple lesson 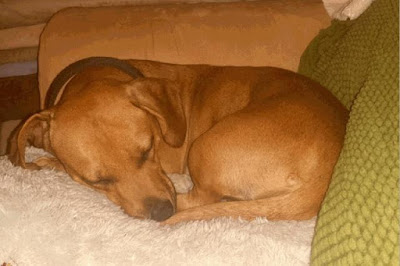 Sometimes, a foster dog comes into your life and turns all your expectations on their head. Sue was such a dog. Rescue's email asked me to foster a dachshund mix. Then, from the pictures I was forwarded, I realized I was actually getting what actually looked like a small Labrador. Picking her up from the rescue's transport van I was immediately informed that she was “a handful”. Finally at home, observing this small yet unexpectedly heavy (25lbs!) girl at play, I wondered about her personality because the rest of her resembled a serious bodybuilder. Not stopping there with surprises, Sue proved to be quite gentle, disarmingly affectionate, yet calm. Regularly flying up the stairs while almost knocking me off my feet, she would then lay at the foot of the bed, patiently waiting to be invited up. Rushing the main door to be let out, she would then lazily sit on the mat to peacefully observe wildlife in action. The only area of life where Sue was just Sue was her eating. That she did with complete and utter abandon. It was her, food, and the two had to merge together in under 4 seconds or less.

Spyke's broken leg or fostering a dog with medical issues

Over the past 8 years I had fostered close to 80 young, old, huge, tiny, unkempt, pampered, terrified, aggressive and completely neglected dogs. Only twice I was asked to take in a dog in need of regular medical treatments.

Meet Spyke, leggy, adorable, one year-old Chihuahua mix. Somehow in his short lifespan, he’s had a misfortune of breaking his front paw in the most inopportune place - his “wrist”. Dogs essentially walk on their tip-toes, so this is the worst kind of injury since they constantly apply the weight on the trying to heal bone. So, similar to horses, many dogs never fully recover full use of their limbs.

I received an urgent text message from my foster coordinator in November, asking if I could take in a dog who’ll need weekly cold laser therapy treatments at the nearby animal hospital. Not knowing a thing about laser therapy, much less that it comes in cold or hot varieties, I agreed to do it as a trial run. Picking the little guy up at the following adoption event from his previous foster, I got a crash course in dog leg injuries. Spyke came to HART from West Virginia, where his owners dropped him at the shelter with an already dangling front paw. Taking pity on a friendly guy, shelter's vet tech stabilized it and called several rescues. Since HART works with a variety of veterinarians who can perform complicated surgeries, little Spyke got a second chance at life.
Read more »

Any yet, even with that and an occasional very-dachshund stubborn streak, adopting her turned out to be easy. By a total fluke, as it often happens in rescuing animals, she was seen by her future family at a local homemade pie shop when a fellow foster brought her in after running an errand. With her husband away on business, Jackie's future lady of the house took her kids to the same exact shop to pass the time and enjoy the weather. Already having a dog of their own, a sizable basset hound, who has had countless surgeries to fix his back, this family was not looking for another dog. But seeing Jackie changed all that in an instant.
Read more »

Having now fostered over 70 dogs, with animals of my own, I sometimes wonder why they tend to get along and if they really do?


To a pack animal, fitting into the new environment or group must be just a stressful as the first day of school is to the average human. Only, unlike us, dogs have centuries of built in “shortcuts” to rely on in order to ease them along the process. I see them use them first hand, so I’ll share my findings with you below.

First, find out their history. Let’s take my most recent foster, Tippie. Her story is a simple one, but it will help explain her state of mind. Only 3 years old, she came to be rescued from a high kill shelter on the border of Virginia with Tennessee. A gorgeous miniature dachshund, with soulful eyes and a string of bad luck that almost got her killed, she must have gotten her start as a well-loved puppy. You can usually tell if a dog has “good” manners underneath their gruff and scared exterior.