Do you really want to herd me? or the truth about fostering and adopting a herding breed dog

Humans are funny creatures. We complain and sigh over things we don’t have in our lives only to complain and sigh about them when we do get them. In a way, we never grow out of that awkward kindergarten stage when another kid brings a toy over which we immediately lose sleep wanting it, only to get bored the moment it comes in our possession. Over time those wishes must have become more elaborate for our needs got more complicated. Wouldn’t it be nice to have a dog that protects us? Let’s breed one whose teeth will scare the neighbors – be they people or wild boars? - Done! Or, wouldn’t it be great to have a dog so little it’s imprisoned by its cuteness into being its owner’s permanent companion? - No problem. The one that takes the cake in my mind is the working breed dog. Originally, it all came out of the basic need for help herding livestock. So humans designed these dogs to have superior intelligence and the ability to understand human language, while doing it all for just a praise instead of a regular paycheck. Sounds perfect? Apparently not. 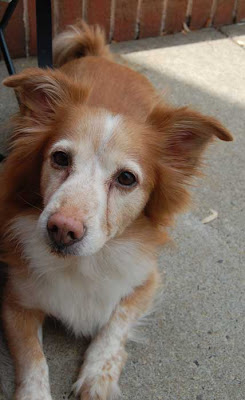 This is Tobe. He was my second foster dog. While not a pure Pembroke Corgi (cow herding breed from Scotland), he does have a bit of Spaniel in him. All in all, Tobe is his own special breed of special. After his owner passed away of terminal illness five years ago, her son contacted the rescue asking for help with Tobe’s placement. This is when I met this 7 year old gentleman with a grumpy side. He got on well with cats and dogs, answered to some commands, and like most Spaniels loved to play with tennis balls until those proverbial cows came home. Sounded like an average middle-aged pet until I realized his Corgi side was still very much present. Corgis, like most herding breed dogs, were designed to be useful in the field. Most herders are not large dogs. Their medium size's more advantageous in making dogs have both presence and agility, which help in providing tough love to any simple-minded lemmings. Farmers of long ago figured out a way to give these breeds one more special edge: they modified dog’s natural hunting behavior into a nipping one. If a cow wanted to stray from the herd, there came a Corgi to keep its wayward ankles in line. No real damage, just a physical reminder of the owner’s wishes. Border Collies, Cattle dogs, Australian Shepherds and a myriad of other “herders” been nibbling on ankles the world over to their farmers' delight ever since. 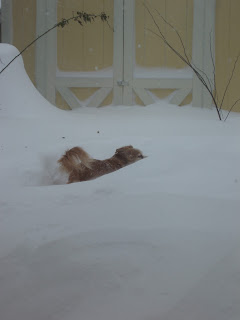 Years passed, and the only real criteria we, present day people, have in determining if we like a dog is its attractiveness and temperament. Long gone are the days of needing a retriever for get our duck dinner out of the water or a helping hand in the pastures. We want our dogs to be pets and companions, not tireless little workers for scraps of food. Only no one told these dogs’ DNA that, Tobe’s half-DNA being no exception. So a month after he was adopted, his family brought him back saying he unexpectedly nipped their grandchild's shoe. Being part Corgi, he was probably waiting for the opportunity to show his usefulness, not realizing that his act of service will brand him a "biter”. I grew up with a purebred Corgi and got accustomed to getting barked at when I was too rowdy as a teenager, or getting herded into the kitchen when everyone was called to the dinner table. I can’t say I was so ungovernable as to warrant my ankles getting nipped, but then I was older and probably didn’t need that level of instruction in my dog's eyes. So, I took Tobe back, "deputized" him and he's been herding my new fosters and a rascal of a cat ever since.

So next time, you come into contact with a diligent worker who is part of the herding group, give him this due for trying so hard to do exactly what we humans designed him to do. It’s his way. These dogs show their love by being our order-keepers as well as well-behaved companions. Give them more than an average exercise space and somebody to keep in line. This should keep your own ankles free from nipping when it is you who happens to misbehave.