Rediscovering Padma or how not every dog is a regular pet 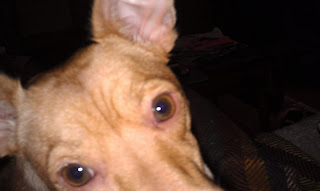 Remember Padma? My Chihuahua mix foster, who was found hiding in a barn after a snow storm? She got adopted by a family with four kids, only to be returned because her energy level and endless need to play overwhelmed them. To curb her destructiveness, kids' parents admittedly relegated her to a crate, where hours on end she grew more rambunctious and vocal. Long story short, she is back, now living with me and my dogs.

Looking at her frolicking, first thought that comes to mind is "Ah, to be that young again".
To be able to run up and down the stairs because it’s a fun and you never get tired. To play hide and seek for hours all over the house in all inappropriate places. To race a house cat to the door only to trample on top of him at the finish line. To disembowel every fluffy toy you meet, only to be given a new one. I have to admit, her temperament is no match for mine either, primarily because she's boisterous, whereas my own pack of carefully picked out doggie-couch-potatoes has difficulty accepting any dog whose sole existence isn’t focused on championship napping. I often catch them looking at her the way people look at a flash mob dancer in the middle of rush hour: with equal parts of bewilderment and impatience. 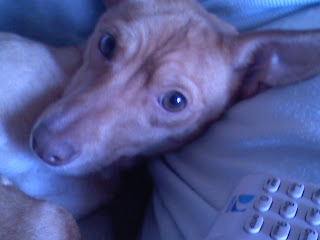 So I started to wonder what kind of families or circumstances dogs like Padma would fit in. Families with kids were now out. She wouldn’t be good for older folks, for despite her being a devoted watch dog, she refuses to sit on anyone’s lap for longer than 2 minutes, not to mention she's yet to master the art of the adoring stare. Being young, her attention span only extends to one thing at a time, especially when she is doing something with abandon or purpose. It was then that a friend of mine sent me a video link out of the blue. In it, an older lady, having been just been voted a CNN Hero, describes how years ago she started training dogs just like Padma. How qualities that hindered these kinds of dogs from getting adopted, turned out to be the most coveted attributes in making them successful disaster and firefighter helpers. Since 1996, this lady's group has trained 131 search-and-rescue dog teams around the country. Needless to say, after watching the clip, I started seeing Padma in a whole different light. Her bountiful energy, her acting deaf to loud noises, her approach to any activity as the most interesting ever coupled with her constantly asking to fetch made me wonder if, inspired by some obedience training of her own, she won't become a hero someday as well? And maybe this little Chihuahua girl won't be the one to dive into rubble to find missing folks, but with the right family recognizing her for who she really is, she might rescue someone from boredom or sadness or loneliness. I've always believed that the secret to life is one’s perspective on things. So if you happen to have a “Padma”-type dog in yours, wouldn't you want a perspective refresher too?

Either way, this link is for you: